From eSkeptic we get a thorough analysis of the creationist film Darwin: The Voyage the Shook the World; 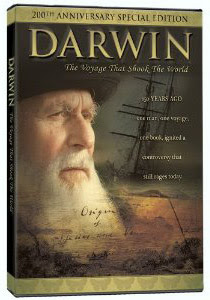 Charlesworth: “Darwin in fact proposed that all humans originated in Africa from a common ancestor with chimps and gorillas. Modern research in paleontology and genetics has confirmed this view, with many fossil intermediates between apes and humans, and a high degree of DNA sequence similarity among modern humans that shows that they shared a common ancestor much more recently than their common ancestor with apes. Given the record of racism and slave-ownership among creationist Christians in the U.S. and elsewhere, it is unfair to point to some remarks of Darwin about inferior races. In his autobiography, Darwin mentions his friendship with a black taxidermist in Edinburgh, whom he describes as an intelligent and pleasant person, and of course he abhorred slavery.”
Claim: The argument for evolution is circular, and full of errors. Naturalism is a paradigm of philosophy and there is no quarrel between religion and science — the quarrel is between naturalism and science.
Hutchinson: “This trots out some old chestnuts of creationism that have been thoroughly demolished in the past by scientists and philosophers. Evolution is descent with modification. That is not circular. The claim is idle semantics at best. Science does not work except in a naturalistic paradigm, so the two are inseparable. What happens between religion and science/naturalism is up to the individual to decide.”
Charlesworth: “Biologists study evolution in exactly the same way as other scientists deal with historical phenomena. They examine the available facts concerning what contemporary processes could operate to explain them on the assumption that these would have operated in much the same way in the past as in the present (just as we all assume the sun will rise tomorrow), and see how well they explain the historical patterns. This works amazingly well. In the Origin of Species, Darwin provided a whole series of facts about biology that make perfect sense in the light of evolution — descent with modification. Subsequent research has thrown up a huge number of others. Any of these can of course be explained as an arbitrary whim of a Creator, so creationism can never be falsified, in contrast to evolutionary hypotheses. In addition, the mechanism of evolution by random mutation and natural selection (and some other processes unknown to Darwin) is a typical scientific theory, which has been receiving ever-increasing support over the 150 years since Darwin. Any good book on evolution lays this out. The creationists disparage evolutionary biology because it conflicts with their religious beliefs, and they are simply not prepared to face up to the evidence. While there are plenty of open questions, and the accepted interpretations of many specific phenomena have changed over the years, this is true of even the most solidly established sciences such as physics. Science would grind to a halt if we had complete explanations of everything. Appealing to non-natural processes to explain away difficulties simply means you are not doing science.”
Check out our creation-watch entry on this film that was shown in Leeds in late 2009 here.

Email ThisBlogThis!Share to TwitterShare to FacebookShare to Pinterest
Labels: Debunking Corner, Voyage that shook the world