We recently covered the emergence of the Glasgow based creationist group the Centre for Intelligent Design (C4ID).  Much more on the C4ID, their background and their creationist claims from the BCSE soon.

One of the early C4ID announcements revealed a "tour" of the UK by one of the main players in the creationism scene in the US, Michael Behe.

So here is your chance to go see what is in store for our kids in science classes if we don't keep creationism at bay.

Here we present some highlights from the Behe files which, if you can attend his talks, might suggest some good topics to ask questions about.

Please get in touch if you are planning to go - we would be happy to host reports here and on the Creation Watch page.

Kitzmiller vs Dover was a court case in the US which revolved around whether or not ID was creationism.  Here are some revealing comments from the judge in his decision.


"Consider, to illustrate, that Professor Behe remarkably and unmistakably claims that the plausibility of the argument for ID depends upon the extent to which one believes in the existence of God."


"What is more, defense experts concede that ID is not a theory as that term is defined by the NAS and admit that ID is at best 'fringe science' which has achieved no acceptance in the scientific community."

"We therefore find that Professor Behe's claim for irreducible complexity has been refuted in peer-reviewed research papers and has been rejected by the scientific community at large."

Behe has previously dismissed such facts with comments along the lines that courts should not decide science.  We suggest that a simple observation that the case provided a controlled environment with ample opportunity for both sides to present their case fully and where rules of logic and evidence were enforced.  In this setting ID lost every single battle.

Or perhaps you can simply quote to Behe his own words in the trial;


“There are no peer reviewed articles by anyone advocating for intelligent design supported by pertinent experiments or calculations which provide detailed rigorous accounts of how intelligent design of any biological system occurred.”

Perhaps you can ask for a list of the experimental work done by ID proponents in the four years since then?  We would be interested to see it.

This is one of Behe's favourite lines of attack on modern biology.

Here is the definition, from page 39 of his book "Darwin's Black Box":


"By irreducibly complex I mean a single system composed of several well-matched, interacting parts that contribute to the basic function, wherein the removal of any one of the parts causes the system to effectively cease functioning." [emphasis in original]

The claim that irreducible complexity falls down on many levels;
For more resources on this topic look here.  There is plenty of material to select from to ask Behe about.  Perhaps take a list of papers on a subject he says science doesn't cover from here.

Perhaps you could printout some of the evidence for one or more of these and ask him about it?  Plenty to look at here.
We even have a peer reviewed example of an irreducibly complex system evolving during the past 70 years.  What does he think of that?
The Argument from Personal Incredulity
This is another logical fallacy at the very heart of Intelligent Design.  If an ID proponent can't imagine how something might have evolved, then, there you are then, it can't have evolved can it?
Here is an example from Alistair Noble on the video on the C4ID web site introducing ID;

"Living things contain a vast web of tiny nanotechnological machines and systems that bear all the hallmarks of engineering design.  It flies in the face of all our experience that such marvels of precision would emerge randomly and evolve through the many required intermediate stages, all of which would have to function properly."

On a lighter side perhaps you could have a game of personal incredulity bingo with any expression that "things just must have been designed" or "are just too darn complicated" counting as points.
Let us know how many points you score from one of Behe's talks.
How Intelligent Design Evolved

Perhaps it might also be a good question to ask Behe where the word "cdesign proponentsists" originates. 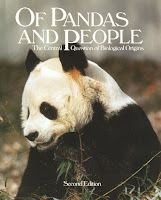 The story is very enlightening and the word has been referred to as the "missing link" between creationism and ID.  Early drafts of the book eventually called "Of Panda's and People" (the text book that the Dover Trial was about) included the word "creationists".  After a landmark US court case ruled creationism as religious and so banned it from state schools someone changed the book into an Intelligent Design text book by doing a "search and replace" exercise on a computer.  They were obviously trying to replace "creationists" with "design proponents" but didn't quite get it right and the result was "cdesign proponentsists".

Here are a couple of paragraphs you might want to read to Mr Behe and ask his opinion on;


"Creation means that the various forms of life began abruptly through the agency of an intelligent creator with their distinctive features already intact. Fish with fins and scales, birds with feathers, beaks, and wings, etc"

The first one is an early draft and the latter from the final version.

There are plenty of other possible subjects to prepare and ask Behe about.  He is also known for his close association with William Dembski and his vague and debunked notions on "information theory" and "design filters".

We could go on and on with other weak areas in his position but this seems like enough to be going on with for now.

If you do decide to go along to one of his talks then please remember that our normal CreationWatch guidelines apply;

For details of when and where the talks are taking place please see our Creation Watch page.